This next generation camera has a 24.MP full-frame image sensor that brings down all the finest detail of your image. Sony a7 III has featured 6 phase AF points with up to 10fps1 continuous shooting with 4K HDR video resolution at 24fps video taken from full-width 6K cropped in 5K for 30fps). It has In-built image stabilization for steady footage.

The display is touchscreen and touches to focus. It gives the most extended battery life of any other mirrorless camera to the date. This mirrorless camera has % autofocus coverage, i.e., 63 phase detection points and 55 for contrast detection. With the Sony SEL80 lens and with the incredible performance you can easily capture breathtaking pictures. Other than this Sony a7 III also has a dual SD memory card slots.

While comparing to the older at III cameras, Sony a7 III has gained in weight and as well as the width though it is a compact camera that fits in your hand. This camera is super compact and lightweight especially while considering the full frame 35mm sensor inside this camera is an easy carrying and easy holding. Other than grip this camera also improved most of the ergonomic and control revision compared to the previous a7 III camera.

The Sony a7 III is super comfortable compared to all the previous a7 series generations cameras. The allotted space for bigger batter helps us to provide all-day shooting standby. This camera has multiple dials over the front and rear, rear jog dial they are more pronounced and very easy to handle. There are some buttons to be noted especially the new AFON, and the AEL buttons were dedicated for its purpose. Sony a7 III was built with dual SD card slots but only one is rated for a faster UHS-II memory card, and the other is just a standard card. The viewfinder is the same as previous versions which are a little low resolution.

The overall quality of the body is solid, and the layouts of other buttons have been slightly changed with bigger dials for aperture, shutter speed, back jog and exposure button. There are few buttons moved as per the comfort especially the C3 button was moved to the back give some room for video record button, which makes it with 13 customizable buttons making it easy to change the settings we need without diving into menus. The overall design quality is on the point to use everything in an instance, and the build quality is strong, durable and light weighted.

With the help new backside illuminated BSI image sensor this camera performs at best in low lighting condition, the sensor is built with dual gain designed. This entirely increases the amount of light available to the sensor beyond less ISO 640. The new sensory gives excellent images by reducing noise and retaining detail in the low dim light. Just with the help of a more fabulous version of the sensor without considering the performance the camera delivers brilliant image and video with excellent quality.  The camera has both low and high ISO range, and with the high ISO performance, it gives a dynamic picture in shadow areas, especially when you push the exposure in post. The high ISO capacity is one of the biggest highlights in this Sony a7 III. It easily solves the lighting problem for both photos and videos.

The image pixel never gets deprived, it ensures for a maximum image resolution. This cam has a mild low pass anti-aliasing filter, this helps to reduce the sharpness of the image, and it produced crisp photos and videos, with the help of this filter you are free from aliasing, moiré.

Sony a7 III has 5 stops dynamic range, which is higher than any other mirrorless or DSLR cameras. It makes the RAW images get better even with both under and overexposure. It cuts off the excess noise and dials black to give a brighter picture in sun-dappled photos.

Other than raw file the JPEG makes the color look more natural and accurate, in low lights the colors are bit warmer. It enhances the skin tone to give a smooth texture image. Sony handles JEEG noise reduction and better sharpening than any other brand; it provides a detailed model compared to any other camera.

Now talking about the video quality, it has a shallow depth of field that gives a cinematic look to your footage. With this Sony a7 III, you can also shoot 100 up to 10 fps with the same full sensor. The depth of field along with the slow motion gives you excellent cinematic footage.

This camera also offers LOG shooting profile. This camera provides 4K (3840*2160) video recording across the full width of the full frame image sensor. In video mode, this camera uses full pixel readout without pixel blending to collect about .4x the amount of data required for the 4k resolution it gives great detail in your footage with depth.

It has the HDR3 that give users to experience visual depth and impact that is less like conventional footages like real life. The high dynamic range HDR) with the 4k resolution you can quickly capture a great quality video.

In-camera performance the autofocus can fire burst shot for a long time at high speed of 10fps up to seconds in compressed RAW mode.  This camera also has 693 phase detection point and 45 for contrast detection which was a significant update compared to Sony a7 II.

The other modes life area, zone, extended flexible spot, burst mode) works great to bring down our needs. Also to mention about the Sony eye tracking autofocus performance like a sharp focus even on animals that keeps focusing on the subject even when it moves a lot, this autofocus is more depth and power.

Taking about the video performance this is the best full frame camera to the date; it crops to around 1.5x which cost you wide-angle capability and great depth of field it captures 4K video at 4FPS from the entire 4.22 megapixel (6K)sensor. When you shoot a 30fps, it takes a mild 1.2 x crop, giving you less detailed footage with the little-enraged depth of field.

The center lock autofocus helps to isolate a specific subject and camera tracks them. By enabling Image stabilization, you can shoot with little less shutter speed though you get sharp footages and pictures.

Sony a7 III offers high capacity NP-FZ 1100 rechargeable battery that has approximately .22x the capacity of the NP-Fw50 this W series battery helps the cam to perform for a longer period per charge. For an optional VG-C3EM vertical grip house two batteries which are sold separately can help when you need your camera for complete heavy-duty performance, the multiple adapters can hold up to four batteries. The NP-FZ100 also supports info LITHIUM technology that makes to view the remaining battery power as both a percentage display and the five-step icon on the cameras LCD screen. The overall battery performance is good enough to click 700 photos in a single charge.

Only a few cameras can satisfy every single customer, and Sony a7 III is on the list. Every user who had bought his mirrorless camera has given positive feedback to this camera.

There are multiple things highlighted as the best in this camera by the users, like the ISO that made a gear experience for low light and night photography’s, the full frame sensor brings had brought down the best images and footages compared to other DSLR or Mirrorless camera in the market. Customers had quoted the camera was hands and entirely fits in hand. The autofocus works as the best in the camera to capture in sports mode. The battery performance had amazed all the users.

They also stated that the video quality was the great achievement of this camera; it gives the best 4K footage ever seen. The slow motion can be used directly without any post-production work the sensor works at the best to give such amazing footages. The users have given a very good Sony a7 III ILCE7M3/B Review.

There was a time everyone carried a heavy DSLR with huge lenses that don’t even give a 4K resolution. If you are looking for a lightweight and compact camera with incredible performance, then you can easily go for Sony a7 III, the newly advanced autofocus and the tracking option makes you capture an object that moves quickly. The 4K resolution from the 6K sensor will easily amaze you, and the battery life is enough to capture all the amazement. 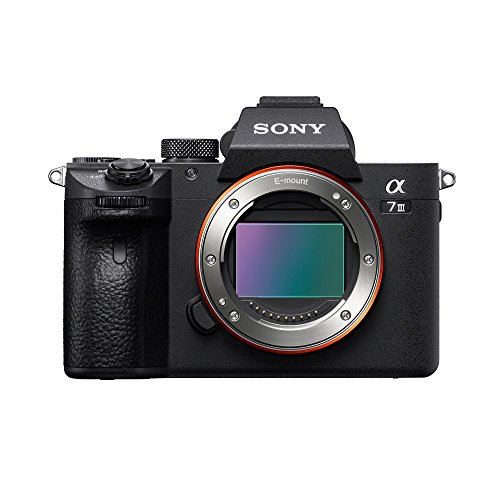